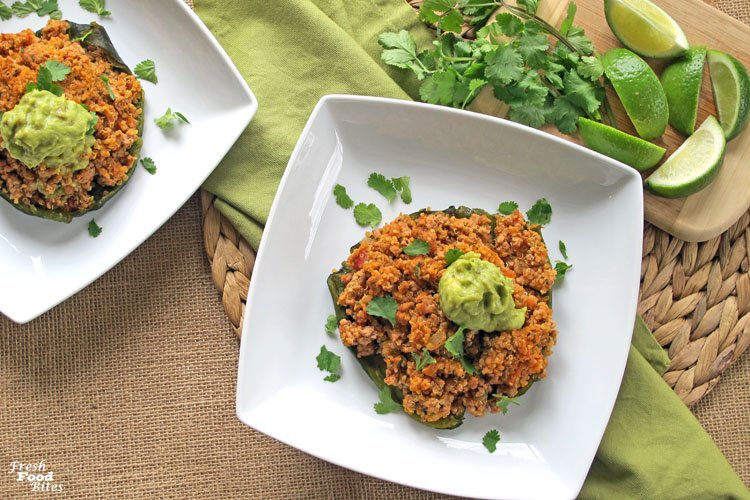 I’m going to go out on a limb and guess that Mexican food is a winner at your house when it comes to family-friendly meals. I know it is at mine! While tacos and burrito bowls are two of our favorites, I decided to switch things up a bit and create these Turkey and Quinoa Stuffed Poblano Peppers.

One of the best things about these Turkey and Quinoa Stuffed Poblano Peppers is that you only need eight ingredients to make them! That’s right, but don’t worry, these stuffed peppers are full of flavor even though the recipe has a short ingredient list.

There are three main ingredients in this Turkey and Quinoa Stuffed Poblano Peppers recipe, and I’m gonna guess that by looking at the name of the recipe, you can figure out what they are.

If you guessed turkey, quinoa and poblano peppers, you would get an A for the day. Well done!

Besides those three ingredients, there are a couple of spices, onion and jarred salsa. You can add cilantro and there are a few options to top them off if it suits your fancy.

How Do You Say Quinoa?

My guess (which is not backed up with data, btw!) as to the reason why this word can be so confusing to say is because the first part of the word is spelled the same as the first part of so many common English words (such as quick, quite, and quit).

Let’s break it down so you never mispronounce quinoa again. Sound good?

Now, for the first part, say “keen” and for the second part, say “wah”

Now put the two parts together and say them over and over until it’s stuck in your head. Use the word several times throughout the day when you’re talking to random strangers to make it really stick. I’m sure you can figure out how to work that into a normal conversation, right?  Ha, ha!

Now that you know how to correctly pronounce quinoa, I bet you also want to be able to tell all your friends and random strangers about the health benefits of quinoa, right? Okay, maybe not, but you might like to know some of the basics so you will be more motivated to work it into more of your meals!

Quinoa, which is native to the Andes mountains in South America, is often referred to as a whole grain, but it’s very similar to buckwheat (see this Crunchy Nut Free Granola to see more about buckwheat) in that it’s not actually in the same family as other cereal grains (like oats, barley, rice and wheat).

Quinoa is a seed, but because it has very similar properties as other cereal grains, it gets lumped into the same category as these grains when we’re talking about food and nutrition.

You can buy quinoa in different colors (such as red, white, and multicolored), making it a pretty addition to many recipes. You can use the different colored quinoa interchangeably in recipes. And don’t worry, the color is totally natural – no food dyes here!

Here are the nutrition highlights of quinoa:

Love quinoa? Here are a couple of my other recipes that use quinoa:

What are Poblano Peppers?

It’s easy to get lost in the world of chile peppers. There are SO MANY VARIETIES! Plus, since you can buy them fresh, dried, or canned, so the possibilities are practically endless when it comes to chile pepper types.

Poblano peppers have a dark green skin and they are larger than many of the other chile peppers. Compared to a typical sweet pepper (or bell pepper), they are usually smaller around but can be longer than sweet peppers.

Compared to many other chile peppers, poblano peppers have a mild heat level. This makes them a good chile pepper to introduce to kids who may not be accustomed to spicy foods.

In some parts of the country, poblano peppers are labeled as pasilla peppers. They are the same variety!

How Do You Roast Poblano Peppers?

There are many ways to roast chile peppers (and sweet peppers too). You can roast them over the flame of a gas burner, on a grill, or in the oven under the broiler or by baking them at a high temperature.

Whether you are roasting a jalapeno pepper, a poblano pepper, or a sweet pepper, each of the different roasting methods will work. What will change is the amount of time it takes to roast the pepper (based on the size of the pepper).

The main goal when roasting a pepper is to char, blacken, or blister (all terms you might see in recipes describing the doneness) the very thin peel that covers the pepper.

Because the pepper is roasted at a high heat level, the pepper takes on a mild toasty flavor, which adds complexity to whatever dish you’re adding the pepper to.

The pepper will also soften during the roasting process.

My preferred method for roasting peppers is to use the oven. If I’m roasting whole peppers (as in this Turkey and Quinoa Stuffed Poblano Peppers recipe), I will bake the peppers at a high temperature, turning them once or twice throughout the bake time so all sides blacken evenly.

Next time you’re looking for something different to make on Mexican night, try these Turkey and Quinoa Stuffed Poblano Peppers. With a short ingredient list and lots of flavor, you’ll be happy you did! 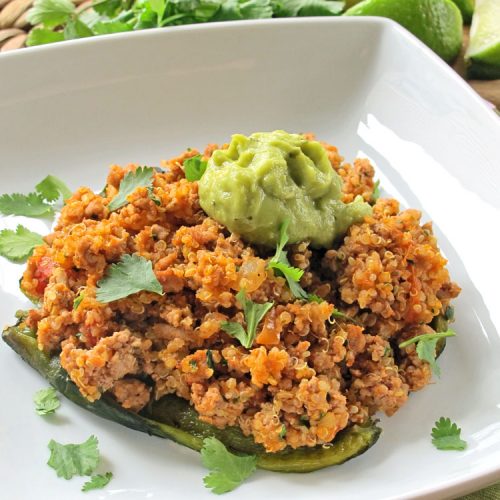 Change up your next Mexican night by giving these Turkey and Quinoa Stuffed Poblano Peppers a try. They don’t require a lot of ingredients and are full of flavor and nutrition!
Servings: 4

Tips: * For a milder version, you can substitute medium size sweet peppers (bell peppers), of any color, for the poblano peppers. ** If cooking the quinoa in water, add ½ teaspoon coarse salt to the water. *** Chile peppers contain volatile oils that can burn the skin and other sensitive parts of the body. Wear clean plastic gloves when working with chile peppers to prevent the oils from getting on your skin.