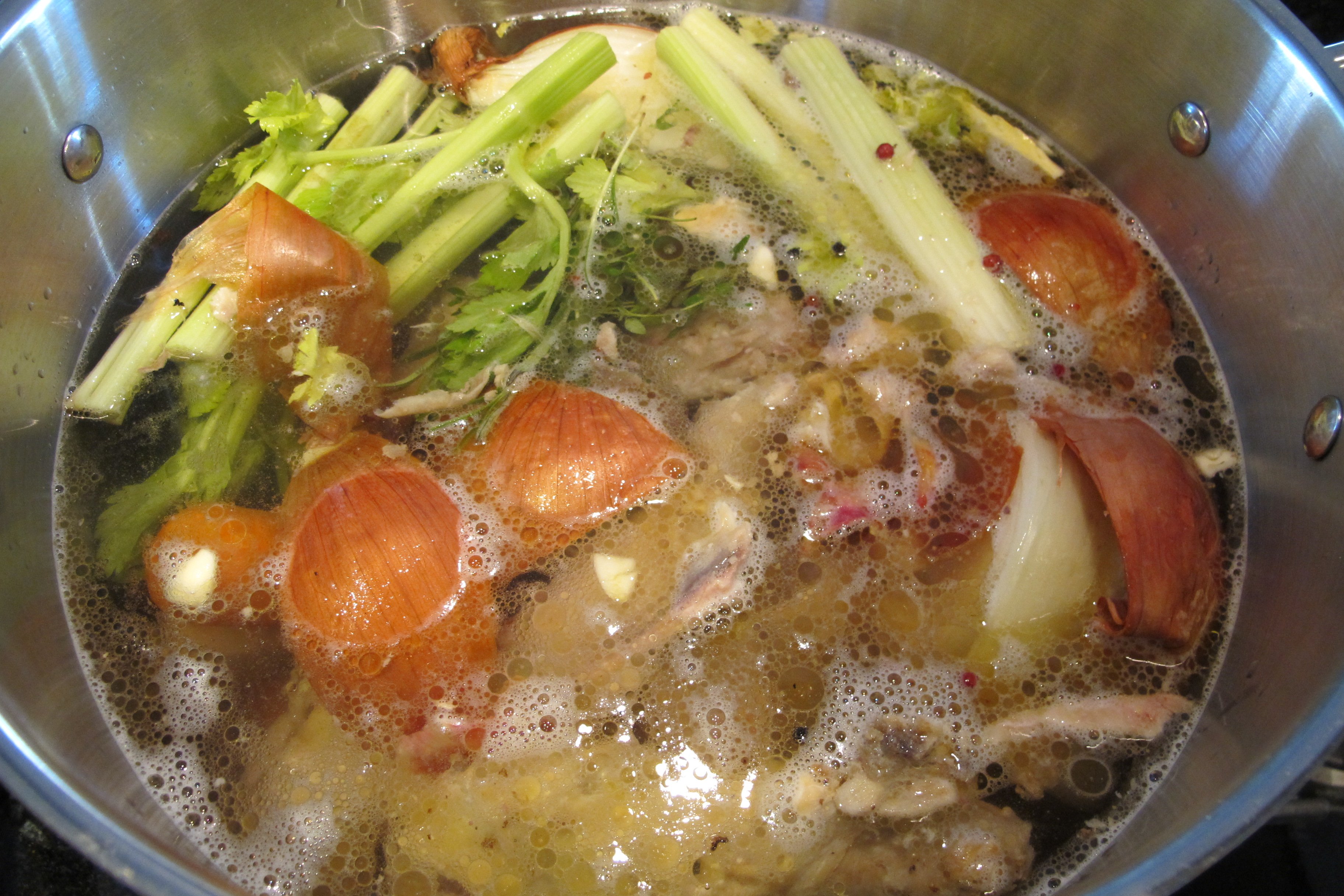 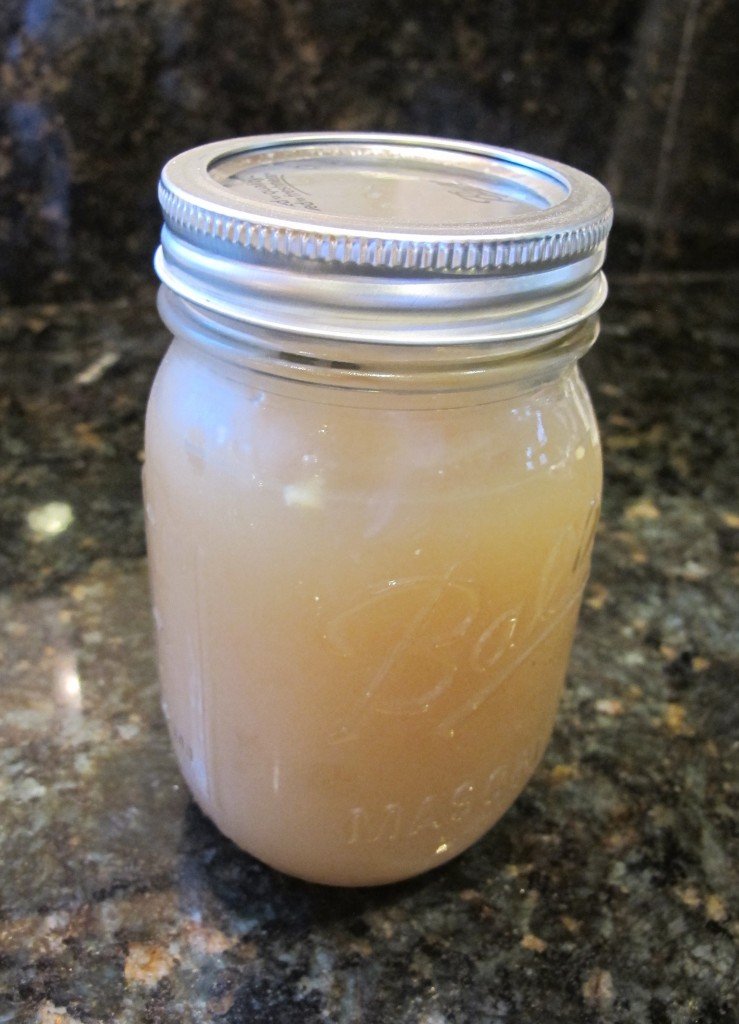 Yes, I make my own chicken broth. I know, you’re thinking “why”? For starters, it tastes SO much better than purchased broth (no offense intended – I think there are a lot of good broth making companies out there, but I think homemade wins hands down!). Secondly, it saves money because it’s virtually free (more on that later). And last but certainly not least, it’s doesn’t take very long, and I only need to make it a couple times a year to have enough broth for everything I need. I make a huge batch (make sure you have a big pot!) and freeze it in small jars so I can pull it out whenever I need it.

So, the reason the broth tastes so good, is because I use the scraps (bones, skin, any straggler meat left on the bones, etc.) from any chicken I cook over the course of a few months. So, the broth takes on flavors from the variety of recipes I make using chicken. Often there are scraps from a chicken we’ve smoked (notice I said “we” there – my husband is very involved in the smoking process so I have to give him credit!), a chicken I roasted with herbs and/or a chicken that’s been spice-rubbed and roasted. When you combine such a myriad of flavors, you end up with a really rich, flavorful broth.

Of course you may be thinking “gross, she saves chicken for several months and then makes broth”. Yeah, it doesn’t look pretty, but I can assure you it’s safe. I keep the scraps in a container in the freezer (key word, freezer) and then pull them out when I have enough to make broth. This contributes to the thrifty nature of the broth because I am not starting with fresh meat-on chicken like some recipes do.

So, really, the only things I add to the broth that I have to pay for (if I don’t count the fact that I originally bought the chickens used to get the scraps since I ate them at another time), are the vegetables and herbs that get added (which amount to maybe $5, if that) and of course the water (again, minimal cost in the grand scheme of things).

As I said, I freeze the broth in small jars. I use some quart and some pint canning jars since sometimes I need a lot of broth, and sometimes just a little. The most important thing to note is to leave a lot of room for expansion at the top of the jars. I actually don’t put the lids on until the broth is nearly frozen because the first time I froze in the jars, I filled them too full, did put the lids on right away, and wound up with cracked jars because the broth expanded and had nowhere to go (revert back to high school science class to remember why this happens – liquid expands when it freezes).

One more thing, if you don’t want to make as much as I do, this recipe is totally scalable.

Trust me, you’ll appreciate the complex flavor homemade broth adds to your favorite soups and sauces. Give it a try, and ENJOY!

Start with a large pot (14 quarts or larger). 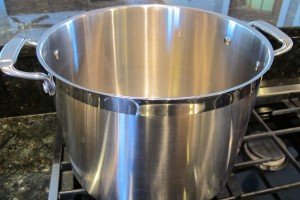 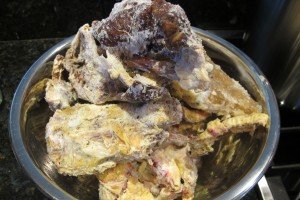 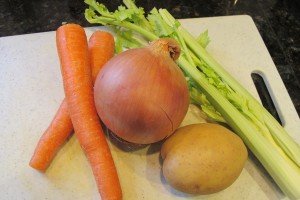 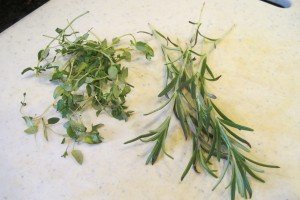 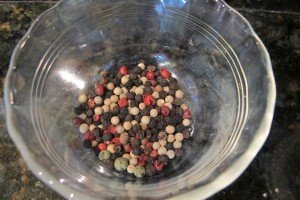 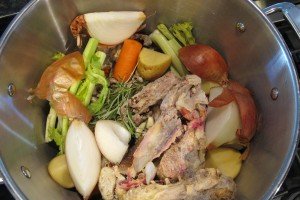 Add water and bring to boiling; simmer, covered, for 6 to 8 hours or even up to 12 hours if you wish. 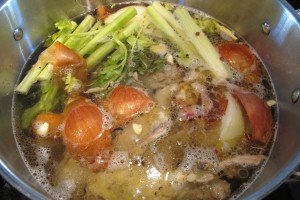 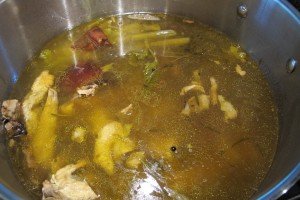 Scoop out the solids using a slotted spoon or skimmer. 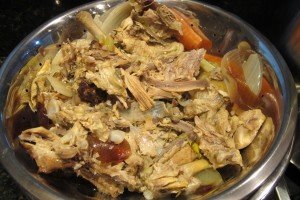 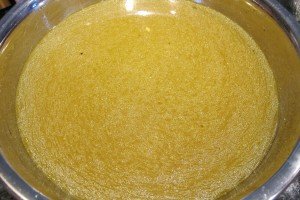 Chill overnight and, if desired, skim off the fat layer that rises to the top . 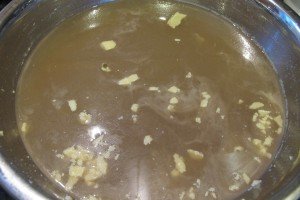 Store in smaller containers in the freezer. 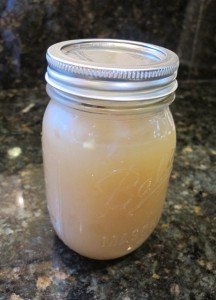 Ingredients:
4 1/2 pounds cooked chicken scraps (combination of bones, meat left on bones, skin, etc.)
Middle rib of a bunch of celery, scrubbed and cut up (you know, the limp, whiter stalks that are at the bottom of your vegetable drawer – they will impart enough flavor and you won’t feel guilty for throwing it in the trash, like what usually happens)
2 large carrots, unpeeled and scrubbed
1 large onion, unpeeled, scrubbed, and cut into wedges
1 potato, unpeeled, scrubbed and cut up
6 to 8 cloves garlic, peeled and halved
6 sprigs fresh rosemary
6 sprigs fresh thyme
2 teaspoons whole peppercorns
32 cups water
1 to 2 teaspoons salt (to taste)

2.  Cool slightly. Use a large slotted spoon or skimmer to remove the large pieces from the broth. Discard, or eat the vegetables if you’re so inclined. Strain the rest of the broth through a fine mesh sieve into two very large bowls. Season the broth to taste with salt (remember not to add too much because when you use the broth, you will be using it with other flavorful, possibly salty ingredients). Cover and chill the broth overnight.

3.  The fat will have risen to the top of the broth and formed a solid layer on top. If desired, use a large spoon to skim off the fat and discard (it’s easier than trying to do it right after making the broth). Use a funnel and large ladle to divide the broth into smaller jars or containers (remember to leave a lot of space at the top – about 1 1/2 inches for glass jars). Freeze until firm and then add the lids and label the jars.