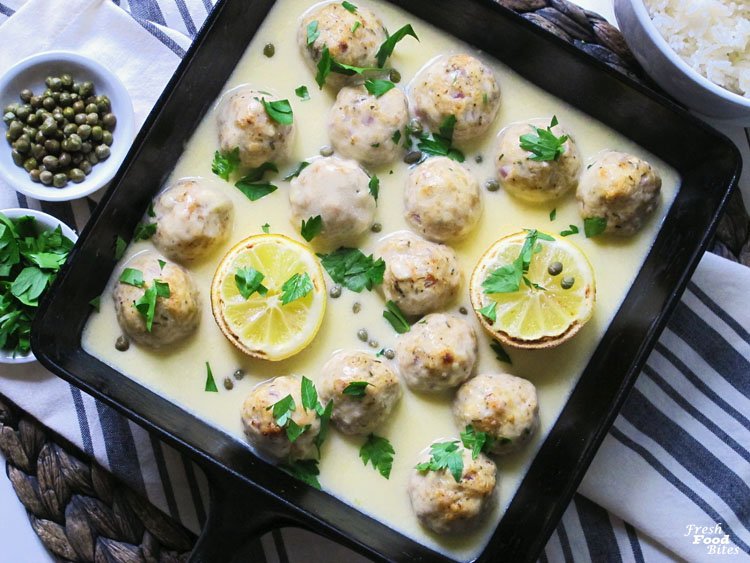 While chicken piccata is traditionally based on skinless, boneless chicken breasts, I think you will want to give this Dairy Free Chicken Piccata Meatballs recipe a try!

The meatballs have way more flavor than a simple chicken breast, which makes the overall flavor even more interesting! But don’t take my word for it…give this recipe a try and let me know what you think be leaving a comment below!

The inspiration for this Dairy Free Chicken Piccata Meatballs recipe came from a friend of mine who had eaten something similar and wanted me to recreate it into a recipe she can make at home. Challenge accepted!

By the way, I love recreating foods that I eat at a restaurant or that my friends have eaten, so if you ever want a recipe for something you’ve had and loved, leave me a comment to let me know!

Does Chicken Piccata have Dairy?

Usually, yes! Traditional piccata is based on a sauce that contains a lot of butter, which serves to thicken and flavor the sauce.

Many American versions of piccata use heavy cream to make the sauce even more creamy and delightful, and the cream also balances the acidity and tang of the lemon and capers really well too. But, of course, heavy cream is dairy!

How I Made the Sauce Dairy Free

Since I was trying to recreate a dish my friend had told me about, I knew I had to make the sauce rich and creamy rather than more buttery/lemony like traditional piccata. But, since I couldn’t use heavy cream, I had to come up with an alternate way to make the sauce.

I tried several different versions of the sauce before landing on the final version, which I’m really happy with! Instead if heavy cream, I use canned unsweetened coconut milk in the recipe, which is thicker than refrigerated coconut milk.

Because canned coconut milk has a distinct coconut flavor, I needed to balance that with something else so the sauce wouldn’t taste so much like coconut. So, the sauce uses part low-sodium chicken broth and part coconut milk, which makes it really flavorful and creamy!

I’m guessing the sauce my friend had eaten would have been thickened by simmering the heavy cream until it was thick and cream.

Canned coconut milk doesn’t thicken the same way as heavy cream when you cook it down, so I knew I would have to thicken the sauce another way. I used a combination of egg yolks and arrowroot to make this happen.

The egg yolks help thicken the sauce and add their own rich flavor, which is a big bonus! Plus, since you’ll only be using the yolks, it’s not difficult to keep the sauce smooth and creamy (in other words, no lumps and only 1 simple step!).

Arrowroot can be found in larger grocery stores or ordered online (I like this brand!)

. Using arrowroot to help thicken the sauce allowed me keep the whole recipe gluten free, which was also my goal!

Capers are the unopened flower buds from a shrub that grows in the Mediterranean. They are popular in Spanish, Italian, and French cooking.

Don’t let their size fool you, though. Capers pack a HUGE flavor punch that is salty and tangy. For some people, the flavor is too strong. If that’s the case, after draining the capers, rinse them with cold water and drain again before using them in your recipe.

How Can I Use Capers?

My goal when creating recipes is to make it so there won’t be a lot (or any) of leftover jarred ingredients after making the recipe. I don’t want to clutter up my pantry or fridge with ingredients I may not use again.

BUT, chicken piccata is not piccata without capers, so I had to use them. When you use capers for a recipe, take as many capers out of the jar as you need, but leave as much of the brine in the jar as you can. The brine helps them last longer.

Brined capers, kept in the refrigerator after opening, will stay good for at least 1 year, which should be plenty of time for you to use them all. I think you’ll want to make this Dairy Free Chicken Piccata Meatballs recipe multiple times throughout the year!

Here are some other ideas for how to use up the leftover capers in your jar:

Okay, before this post gets WAY TOO LONG (there was just SO MUCH to say!), put the ingredients for this recipe on your grocery list and plan a dinner to make it for! And, by the way, this is one of those recipes that not only works for a weeknight dinner but will also be a hit at your next weekend dinner party! 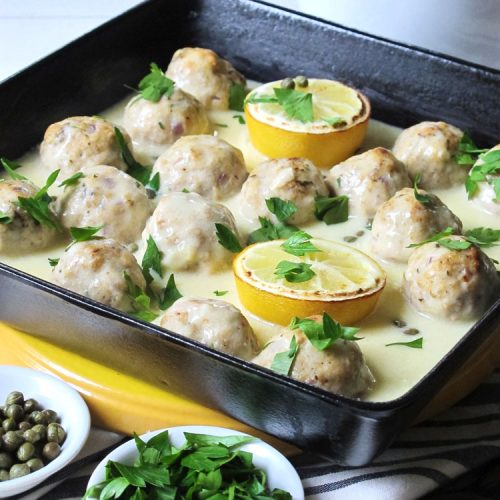 This easy Dairy Free Chicken Piccata Meatballs recipe has everything you love about chicken piccata without the dairy and gluten! That’s right, it’s a gluten free and dairy free recipe, but don’t worry, the sauce is creamy and flavorful with just the right amount of lemon and capers.
Author: Laura Marzen, RD

* Canned coconut milk separates in the can, with the fat rising to the top of the can. Before measuring the coconut milk for this recipe, pour all the contents from the can into a medium bowl and whisk the coconut milk until smooth. ** Broiled Lemon Halves: Cut a thin slice off each end of a lemon so that the ends are flat. Cut the lemon in half. Place lemon halves on a foil lined heavy baking pan. Broil 3 to 4 inches from the heat for 7 to 9 minutes or until tops are browned. You can make these before broiling the meatballs since they broil closer to the heat than the meatballs. Set them aside while broiling the meatballs. Make sure to adjust the oven rack to the correct position in the oven before broiling the meatballs! NOTE: This recipe can be doubled to serve 8! YIELD: 4 servings