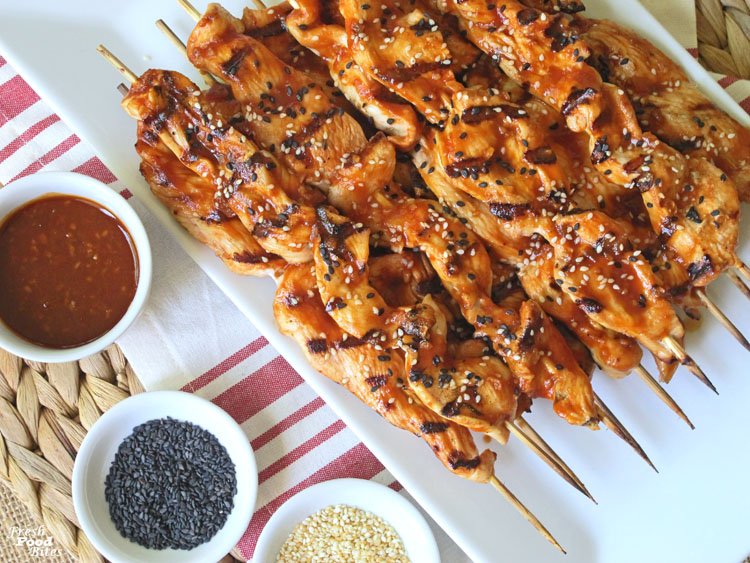 Who else is embracing grilling season like me? Two things are blowing my mind though…1) It’s May and school is almost out for the summer (yikes!), and 2) Memorial Day is literally right around the corner! If you don’t want to serve the same ole’ hamburgers for your Memorial Day barbecue this year (not that I’m knockin’ hamburgers!), give these Chicken Kabobs with Chili-Garlic Barbecue Sauce a try instead.

When it’s grilling season, are you a person who falls into a pattern of grilling the same things over and over basically all season, or do you change things up often and try new recipes and ways of cooking your favorite meats and veggies? Leave me a comment below to let me know!

For me, I definitely have the standard “get dinner on the table lightning fast” type of recipes (written recipe optional in most of these cases), but, to avoid boredom throughout the summer, I need to try new things on the grill too.

And when it comes to entertaining, I definitely like to take things up a notch, whether by using a more interesting cut of meat or making a more unique marinade or sauce.

My original idea for this recipe was a chicken kabobs recipe bathed in a more traditional American style barbecue sauce that didn’t have any sugar added. If you’ve ever looked at the ingredients in your favorite bottled barbecue sauce, you’ll understand why I want to create that recipe – barbecue sauce is typically very heavy in sugar!

But then I made a quick little sauce to toss with some shredded chicken for a family gathering we had several weeks ago, and it was such a hit that I knew I had to share it on my blog! Rather than use the shredded chicken like I had that day, I wanted to use the same sauce on grilled chicken kabobs.

Thankfully I had written the recipe down as I made it (which I don’t always do and ALWAYS regret later), so I was able to remake it pretty easily. Even though I know it’s not always the best idea in the world, I am usually making up the recipes I cook when we are entertaining. Yes, it takes more time, and no, they don’t always turn out perfectly, but it’s fun for me so I do it anyway!

From the original recipe I made to this final recipe, I made two changes. The first was to take out jarred chili-garlic sauce, mostly because I prefer not using products like this, but also because I don’t like calling for products that you may only use for one recipe. Having a bunch of partial bottles of ingredients you may never use again isn’t very helpful.

The second change I made to the sauce was to take out the honey that I had originally added. I didn’t actually think this would work and fully intended to leave the honey in, but when I made the sauce the second time, I forgot to add the honey. Oops!

As it turns out, the sauce tasted great even without the honey, so now it fits with my original goal of creating a “no sugar added” sauce. Yay! I love it when mistakes have happy endings. Don’t you?

That was probably WAY MORE than you needed or wanted to know about this history of this Chicken Kabobs with Chili-Garlic Barbecue Sauce recipe, but all that to say that I really do test and think through all of the recipes that go on my website. I want them to work really well and taste even better!

The sauce for these chicken kabobs has flavors that are Asian inspired, but there’s enough tomato in the sauce to make it feel similar to an American style barbecue sauce. I’ll call it Asian-American fusion and it has a kick of heat form the crushed red pepper that can sneak up on you! I think you’ll love it!

If you’re hosting a Memorial Day barbecue this year, give these Chicken Kabobs with Chili-Garlic Barbecue Sauce a try! If you need a delicious potato salad to add to the menu, check out this Bacon-Avocado Egg-Free Potato Salad. You won’t be disappointed! 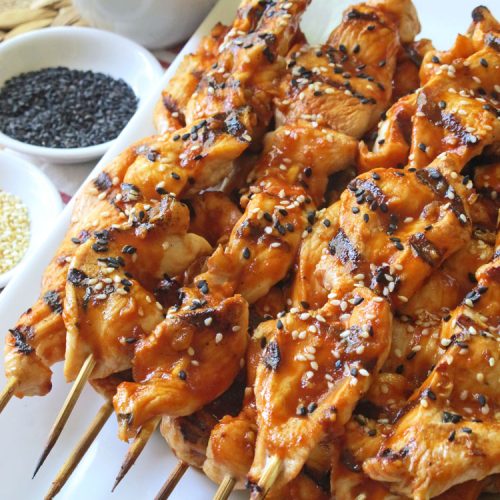